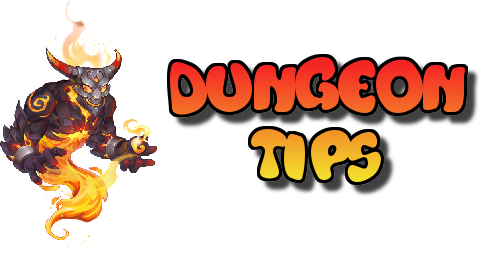 Rule of thumb is to use one of Avalon, Nova or Mairi. If you use Moloch, make sure he does not take more damage than is healed, you need to time abilities perfectly. Hyperion is a must use. Best combination is to use Ignis and time his ultimate to enhance Hyperion’s healing.

The rest of your team should be a combination of two: Araji, Eden, Nova or Mairi. Choose what is needed for the battle or take titans which have the highest levels. Eden and Nova are mostly used due to their area of effect abilities. Nova can stun enemy Araji just as soon as he starts Incinerating Ray.

Make sure you end the battle with minimum HP loss and often more importantly, max or close to max energy for most of the titans. It is very important to have full energy for Ignis or one just one attack from full. This is to boost Hyperion’s early heal and everyone’s early damage. Vulcan and Sylva are quite bad and usually not needed to get far in the dungeon.

Do not use auto battles and try to make sure your most important titans end with as much energy as possible. If you use auto battles, you do not maximize full potential of your titans and some of them might take a bit more damage than they should.

Priorities to save energy:

Titans to level for the better dungeon runs

If something goes wrong during the batle, retreat and try again. You can also experiment with Eden’s Subterranean Prison and hope to pick the targets you want to minimize health loss.

More information and tips about the Titans could be found in this page: Titans

Hope you guys found these tips useful. Hopefully now you will get way more titanites than you used to. Please let us know how did your battles go in the comments. Good luck!